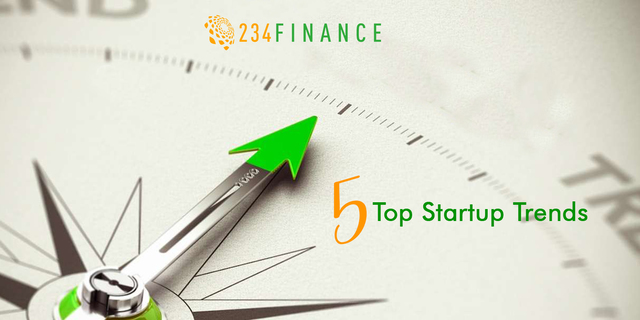 In the year 2015, startups experienced the positive and negative side of business. On the positive side, there was a continued growth on a worldwide scale. For example, 600,000 new businesses emerged in the UK alone,  while a minimum of $5.6 billion was raised to fund Indian startups.

On the downside however, a troubling research paper was published by the US National Bureau of Economic Research, revealing the decline of high growth startups after the year 2000. In recent times, the U.S economy has relied on small businesses to provide jobs for the population.

To thrive in today’s evolving business environment, here are 5 top trends from startups:

More than ever before, many people have embraced freelancing. A recent Time article reported that more than 90 million people have participated in “on-demand” also known as gig economy in the US.  Another study conducted by the Freelancer’s Union last year, revealed that 54 million people (roughly 34 percent of the US workforce), have done freelance work in the US in the past year.

Small businesses cannot compete with larger organizations who can afford to pay higher salaries and offer better benefits to their workforce. As a result, freelancing is becoming mainstream since there is no need to commit any employee after the project has been delivered. The option of working remotely, with flexible hours has also made freelancing more attractive than conventional jobs.

Crowdfunding has become a popular fundraising strategy, that platforms like Kickstarter and Indiegogo have been able to successfully implement. Successful ventures like Pebble, have been crowdfunded in the past. New crowdfunding practices are also being implemented. Previously, only investors with a certain threshold of wealth and assets could invest in a company and receive equity. Now, anyone can fund any venture that they find interesting, without having a stake in the business. Read more on crowdfunding here.

New studies are being released to explore the importance of personalization, i.e. offering products or services to meet customers’ needs with the aim of increasing customer satisfaction. However, many companies are lagging behind in this competitive role. Pegasystems in a recent data survey, revealed that key customer service industries, specifically retail banking and telecommunications, are severely behind the curve on personalization. 60% of those surveyed admitted that they were “getting the basic right” on personalization despite a growing trend in the market. Many established organizations are reluctant to discard their old systems and processes, and this is an opportunity for small businesses to take advantage of. Startups should focus on personalization to gain entrance into the market and carve their own niche.

These days, mobile phones have the same functionalities that computers have. In 2015, mobile users surpassed desktop Internet users, and mobile messaging is also on the rise. WhatsApp has nearly 1 billion users and Facebook Messenger has roughly 800 million monthly users. Despite so many users and so much time being spent on mobile devices, mobile platforms have lower conversion rates for e-commerce platforms, than desktops. This mobile shift provides an opportunity for businesses to target and engage mobile users with their products or services.

In 2016, marketing teams will increasingly target mobile devices, create responsive ads, with a focus on video and short digestible content. Companies are predicted to spend 51% of their digital ad budget on mobile devices in 2016 (against 40.2% in 2015). Finally, e-commerce startups are expected to aggressively push to increase conversion rates via mobile platforms.

Online video has become popular in recent times and innovative companies are keying into this trend. Businesses are creating high quality video content to engage their target audience on different online platforms. Periscope, for example is being used as a tool for startups to reach their audience through live video-streaming.