Mozambique: The Red Glow Of Riches

Mozambique: The Red Glow Of Riches

By Jay Caboz of Forbes Africa

“Deep in the heart of the African bush are buried riches. It is a treasure bringing money to Mozambique.”

You would struggle to find this dot on the map; nevertheless it glows with African wealth. Not even Google Maps can pick up this 33,600-hectare mine near the remote town of Montepuez, 2,400 kilometers north of Maputo. The way to get there is with a gang with machetes hacking through the bush.

Many thought there was nothing here but orange sand and Acacia trees. Instead, this remote African spot is a fresh source of rich red rubies. “Fine Mozambican rubies are a very attractive bright pinkish red with good clarity and are comparable with the legendary ‘pigeon blood’. THE RED GLOW OF RICHES rubies of Myanmar, formerly Burma, which frequently command the highest price per carat of any colored gemstone,” says Jessica Patrick, Head of PR and Communications at Gemfields.

Gemfields, the British supplier of colored gemstones, has a 75% stake in the Montepuez ruby mine. It has extracted 16.1 million carats of ruby and corundum since August 2012. Mozambique’s new ruby riches caught the world’s attention when the mother and father of all rubies went on auction in Singapore. It was a monster 40.23 carat ruby, from the depths of the Montepuez mine. It is called the ‘Rhino Ruby’, and sold for a mammoth, yet undisclosed, amount on the auction hosted by Gemfields in December 2015.

It’s a story that goes back to the 16th century, when corundum, the rock name for ruby (red corundum), sapphire (blue corundum) and fancy sapphires (all other colors), was discovered. Remarkably, they lay undisturbed until 2005, when geologists heard rumors on the thriving Asian ruby markets of rich pickings under the soil of Mozambique.

It took another three years for hunters near M’sawize village, inside the Niassa National Reserve, to stumble upon rubies on the ground. The discovery sparked a Wild West style ruby rush. Illegal miners, known as garimpeiros in Portuguese, flocked through the bush to try their luck. Hundreds risked their lives down dangerous pits, in the slim hope of making a fortune. The garimpeiros are like a pack of hyenas on the hunt. Dozens hide in the bush with pickaxes and spades on the fringes of the mine. When mine security officers turn their backs, the garimpeiros rush in, while others stand guard. If they aren’t caught, they lug loads of dirt to the river to rinse out the rubies. The ruby is then sold on the black market to shopkeepers in Montepuez. 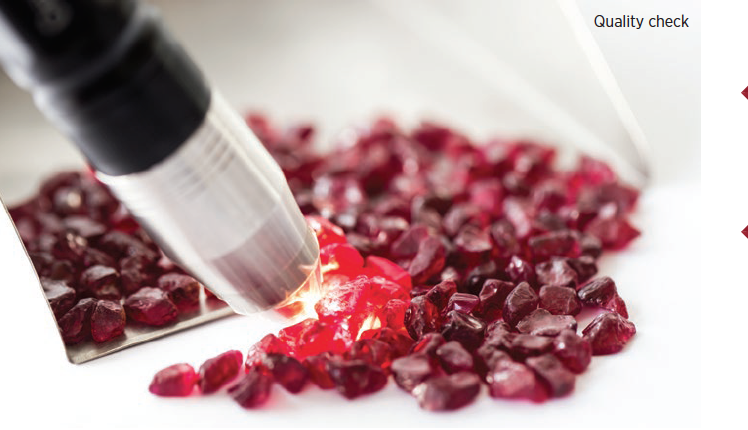 On the legal side of the mine, the operation runs like clockwork. Graders dig through tons of orange sand every minute and drop it in cleaning stations. Their workers in gloves sort ruby from rock, behind special glass doors. Mozambique may have a new mineral asset to go with oil and gas. But ruby market buyers beware: the price of precious stones rises and falls sharply. The Wall Street Journal reports that, in 2012, a carat of high quality cut Classic Ruby from Myanmar fetches $43,923. But for 20 years, from 1980 to 2000, the price started at around $19,000 a carat.

In 1975, the price was a quarter of this at $2,500 a carat. Few among the thousands of illegal miners and tens of legal miners have time to pause for thought as they sift through the dirt on the hunt for the next monster-sized ruby. It is just another day in Mozambique in a place you can’t find on the map.

234Finance is an online hub that promotes African Entrepreneurship. We feature small and medium sized businesses on the platform, shedding light on the current and future developments in diverse sectors across Africa. We also provide free resources, share opportunities and events on our platform that entrepreneurs can benefit from and thrive in Africa’s tough business landscape.

234Finance is an online hub that promotes African Entrepreneurship. We feature small and medium sized businesses on the platform, shedding light on the current and future developments in diverse sectors across Africa. We also provide free resources, share opportunities and events on our platform that entrepreneurs can benefit from and thrive in Africa’s tough business landscape. More by 234Finance

Marketing: Powered by Our Youth

By 234Finance
Articles Economy
Cookies
To make this site work properly, we sometimes place small data files called cookies on your device. Most big websites do this too.
Accept