Taking Education Into Our Own Hands

Home - Articles - Taking Education Into Our Own Hands 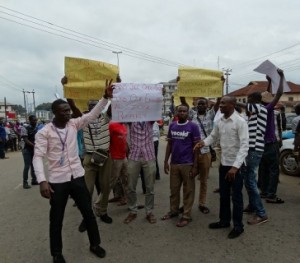 I owe the title of this piece to Ankur Chawla’s article on education published on Students For Liberty’s website. While he was writing a reaction to an opinion in an American publication, he could not have said it better if he were a Nigerian student addressing his contemporaries sitting at home due to the 6-week old strike action of the Academic Staff Union of Universities. In short, his article tell us that students should take their education into their hands.

The Academic Staff Union of Universities (ASUU), as the union of university lecturers in Nigeria is called, is on strike to force the government to implement an agreement it reached with the union in 2009. The Union has vowed not to call off the strike until the government pays it 92 billion naira ($5.6 million) in addition to other demands. While the amount of money that will take the lecturers back to class may not be clear, what is certain is that more than the 30 billion naira will be pumped into the university system with the bulk of it going into the pockets of lecturers. In my mind, this is flawed as history shows when money exchanges hands for the union to call off its strike, everyone except the students on campus smile. Yet students are the most important part of the Nigerian educational system.

The government assumes that throwing more money to the lecturers will give 21st century education to Nigerians. While more money may help, the people who should decide how government allocates education money should be the students. It is saddening to hear that Nigerian graduates are unemployable when they still get 19th century education. Libraries have turned to archives, and archives are not worth their name. Lecturers are lords in their classrooms brooking no dissent, and universities are the fiefdoms of Vice-Chancellors. Yet the people who should be best served, the students, are not better for it. Ask any student in any public university and they will tell you they wish they had a choice to go to a private university in or outside of the country because of the incessant strike actions in Nigerian public universities.

The situation is similar to the one African-Americans faced when Reverend Martin Luther King Jr. addressed them in Chicago in 1963 and offered them this advice: “When you are behind in a footrace, the only way to get ahead is to run faster than the man in front of you. So when your white roommate says he is tired and goes to sleep, you stay up and burn the mid-night oil.” The Nigerian Educational system is behind in the jet race because it is still running on its feet. One does not need the rankings of global agencies to know that things are amiss; Nigerians themselves are voting against it with their money by going to Ghana and South Africa if they are not opportune to go to Europe or North America. As a product of the Nigerian educational system, I am convinced that if we change how we tackle this challenge, we can quickly move things forward.

We can educate more people quicker and better if all universities had adequate internet facilities and not the cosmetic dressing employed by some universities to move forward in Webometric rankings. While the ranking has helped to encourage the embrace of the Web, it is clear that some universities still do not provide internet access with the excuse that students will use it for internet scams. An internet enabled device changed my scholarship in a Nigerian university. The internet can turn all homes into a university if we let it.

Nigerian students should take their education out of the hands of the government,  out of ASUU, and into their own hands.

The following article was contributed by Ajibola Adigun